Python on Linux is downright awkward. If you want to take advantage of the latest tools and tricks that the scientific Python community has to offer, that means installing Python packages that aren't always available in your distribution's package manager. People recommend using pip, but if you just apt-get install pip and sudo pip install this that, now you've gummed up apt-get because it doesn't know about the packages that pip installed.

Luckily, it's not hard to do better.

What if you could keep your own independent version of Python in your home folder? This way, you wouldn't have to worry about breaking your system with experimental packages -- you could just remove the folder to go back. This also lets you separate out each of your projects' dependencies.

You don't have to be a rocket scientist or a UNIX-bearded guru to set this up.

Here are the steps we'll take. Don't skip any because each one depends on the last. You can skip installing OpenCV if you don't need it though.

Once you're through, you'll have a nice way of keeping packages in your home folder, a custom version of python, a fresh-compiled OpenCV, and everything you need to run ipython notebook.

Do not use sudo for any of the instructions below. You don't need it and it will mess your home folder's permissions up.

If you only read one section from this article, make it this one.

This step frees you from ever having to worry about apt-get again. Once you have it set up, you don't have to ask root to install your favorite packages anymore; you can just compile them yourself and keep them tucked away in your home folder.

This is wonderful for shared systems, old systems, or when you want to try inspecting/modifying a package's source code. This is the secret sauce that makes local Python work. It's completely distribution-agnostic, it doesn't make invasive changes, and it's easy to go back if you decide you don't want it anymore.

You might already know about $PATH, the environment variable that lists all the places where your programs live. When you run a command like ls, the kernel will search your current PATH to find that command. My $PATH currently has:

One great pattern is to keep all of your local programs in a ~/local folder. This way, you can have your own compiled Ruby in ~/local/ruby, a NodeJS in ~/local/node/, and so on. When you type irb, your shell really runs ~/local/ruby/bin/irb.

It's really elegant. This pattern helps with debugging and version isolation and you can just rm -r ~/local/ruby to cleanly and completely remove the local ruby with no system-breaking side effects. Want to switch to another version of node? Just move your node folder out of the way and compile a different version into its place.

Let's build Python this way. First, create the ~/local folder that will keep all the packages you install.

Then, add this to the end of your ~/.bashrc:

You now have to apply your changes by running source ~/.bashrc (You should source your bashrc every time you install a package this way.)

If something breaks or you want to undo all of your work today, just delete ~/local, remove that part of your ~/.bashrc, and log out. When you log back in, everything will be the way it was before you meddled with this article.

Now, let's compile our own Python from source. Head up to http://python.org/download/ and download the latest source code release into /tmp, but make sure it's Python 2.x and not Python 3.

Make sure you have all the dependencies: build-essential, autoconf, automake. Don't forget zlib1g-dev (the thing that provides zlib.h) or else Python's zlib package won't work. You also need libssl-dev to download HTTPS packages.

If this step gives you any errors, stop here and correct them. You may need to install several development packages to be able to compile Python.

Now you have a new Python, but you have to apply your .bashrc again before you can see it:

At this point, check that you can run python and check that it's the correct version.

Awesome. Your Python is now installed, and you didn't even need root permission.

Now, whenever you open up a shell, running python will use your new version. If you want to temporarily start the system-installed version, run it by calling its full path:

With Virtualenv and Pip, you can install python packages just by typing pip install scikit-learn. They'll be placed right into your home folder and you won't have to fuss with apt-get or sudo.

A virtualenv is just a folder. I'm going to keep my virtualenv in ~/local/i686/python/venv, but you can put it somewhere else.

Because we don't want to rely on the system's broken/old virtualenv version, we will again set one up ourselves. Download virtualenv from https://pypi.python.org/pypi/virtualenv and place it in /tmp:

Now, create your first virtualenv somewhere in your home folder. I find that it's best to just put it the same place where I put my Python.

Make sure that you're actually using your new python for this step!

This is what things look like before using virtualenv:

We activate the virtual environment, and this is what things should look like now:

Note well: Every time you wish to use your new virtualenv (and thus your new pip), you must source the venv-folder/bin/activate script!

Suggestion: Put it at the end of your .bashrc so it happens automatically.

You are now ready to go hog-wild, installing all the Python packages you desire.

Or you can install OpenCV straightaway:

At this point, you should have a working pip. Let's test it by installing numpy, which is a dependency of OpenCV anyways:

Now we can install OpenCV proper.

Note that the ~/local package trick works for shared libraries too, which means that by keeping OpenCV there, you can just compile any C/C++ file against any arbitrary version of OpenCV that you like, no matter how messed up the rest of your system's packages are.

This is what we call super convenient.

Head on over to http://opencv.org/downloads.html and grab yourself a copy of OpenCV's source, again placing it into /tmp:

OpenCV uses the CMake build system, so let's just compile it. Unfortunately, OpenCV requires literally tons of command line options to make it work inside your virtual environment, so read the code below before copying it into your terminal. In particular, I'm assuming that you have Python 2.7 and that your virtualenv is in the $VENV_FOLDER variable:

This script generates a lot of output, but the important bit is at the bottom: a checklist of all the features that will be compiled in to your OpenCV library. Here's my ./configure output for comparison.

In particular, note the Python version that OpenCV will compile against:

Make sure that all of these paths are inside your home folder! If any of them begin with /usr, OpenCV won't work.

(Protip: At this point, if you want to build OpenCV with, say, ffmpeg support, now's the time to compile your own ffmpeg. Remember: If you compile FFMPEG with ./configure --prefix=$HOME/local/ffmpeg, it will go straight in your home folder)

Anyways, it's time to compile OpenCV:

Horray! That took a while. Again, re-source your bashrc so you now see your lovely library. Let's test OpenCV:

An aside: Preaching the good news about pkg-config

Did you know about pkg-config?

If you don't, you should.

Let's test our newly-compiled OpenCV library. Here's a small source file that displays a grey rectangle to the screen:

Oh bother, now we have to compile it. Remember those command line options? I bet you don't.

Luckily, pkg-config does! Check this out:

Compiling and running your sample is a snap thanks to pkg-config:

Note: Did pkg-config find the library in your home folder? If not, you forgot to source your .bashrc:

IPython Notebook and the rest of the Scientific Python Stack

You've done most of the hard work. Installing packages is super easy now. Here's a slough of interesting ones:

Note that you might need the libblas-dev and liblapack-dev packages from your distribution's package manager, or you can compile them yourself just like how we compiled OpenCV. They're like twenty years old though, so you probably don't have to worry about your distribution carrying out-of-date versions. (At the time of writing, BLAS' first release was 34 years ago.)

After this, you can now just run ipython notebook and your browser will pop up, ready for editing! 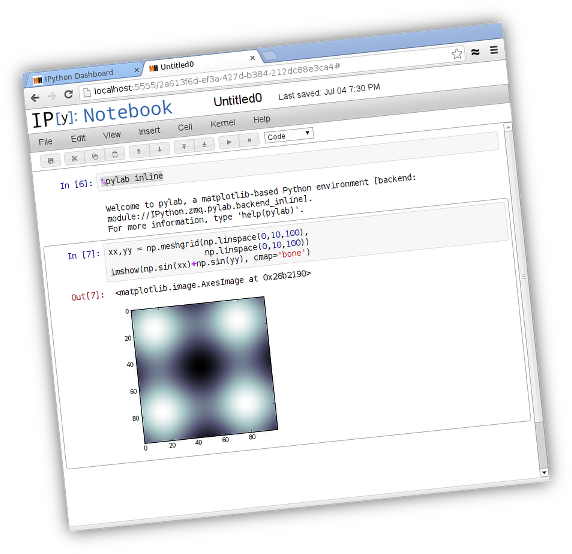